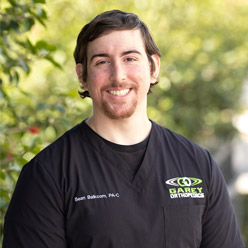 Sean Balkcom was born and raised locally here in Southern California. He graduated from Cal Poly Pomona with his Bachelors in biology in 2014. Later he received a master’s degree in PA studies from Western University in 2016. After largely focusing his studies on surgical specialties, he began working with Garey Orthopedics in 2017. He treats patients of all ages for general orthopedic conditions as well as assisting in surgery for total joint replacements. He has been a member of both the American Academy of Pas, California academy of PAs, and is board certified through the National Commission on Certification of Physician Assistants. He currently has hospital privileges at Casa Colina Hospital for Rehabilitative Medicine. His passion for orthopedic stems from his love of sports and weight resistance training.